Do any of you set goals for yourselves each week?  I have found that making myself a list of things I want to do each week helps me to stay on track and motivated during this time when I am mostly spending my time at home. My goals for this past week included getting two Elgin Piecemakers comfort quilts off to the long arm quilter. The first top was completed so all I had to do was wash the backing fabric, press it, sew one seam and it was ready to go.  I did not get a picture of the backing but here is the top --the double disappearing nine patch blocks were sewn by the members of the guild and Pat sewed the blocks together.  My jobs were to do the backing and binding.  Julie lives a 10 minute walk from my house and she will be long arm quilting this quilt. 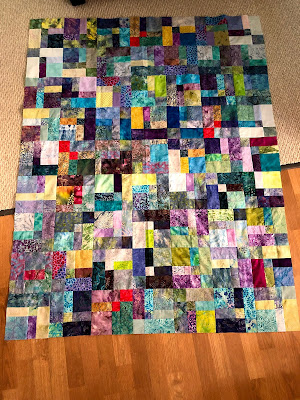 The second quilt top was started by Jacqui and I at least 5 or 6 years ago using 10" squares with words on them, donated by members of the guild.  All the pieces were cut out and in a bag which Jacqui just recently found in her sewing room. I laid them out on the design wall last week and this week sewed and trimmed each block before assembling the quilt top.  The backing, which is a text fabric, was also in the bag along with a label.  I walked over to Julie's house with this quilt on Friday afternoon.  It's out of my sewing room and into hers! 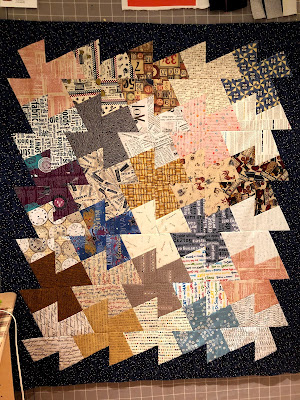 Goal accomplished!  I also wanted to finish my blackwork project so that I can get it framed.  I just had this orange square to finish. 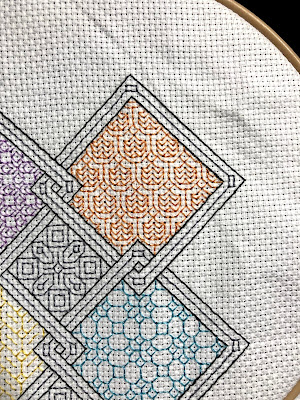 Here is the whole thing after being pressed.  I have washed it and a Frank Lloyd Wright piece that I finished a few months ago so they are ready for the framing appointment on Thursday this coming week.  I take my projects to a local framer--she does a great job and is only seeing customers by appointment right now. 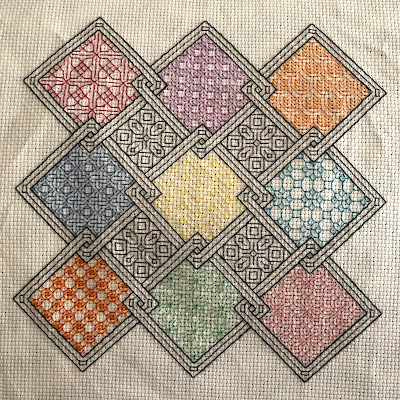 I had hoped to finish my squirrel facecloth as well but it is still in progress. You can see the squirrel much more clearly now. 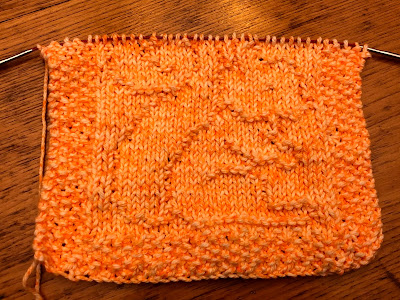 Christmas projects are ongoing, behind the scenes. All will be revealed after they have been gifted.

Finn had a haircut this week.  Here are the before and after pictures. He's still cute as ever! (I may be a bit biased!) 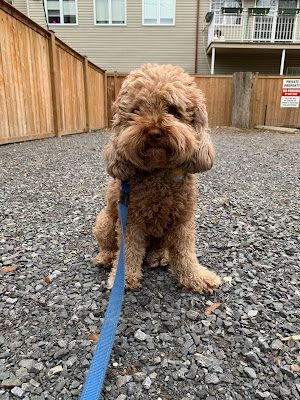 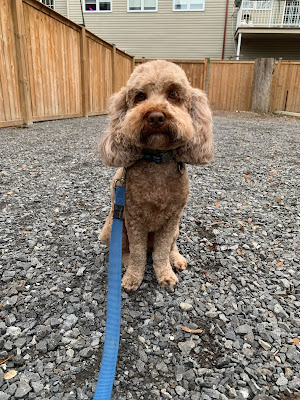 My daughter has 12/19 hexagons done on her bee blackwork project.  Only seven more to go! 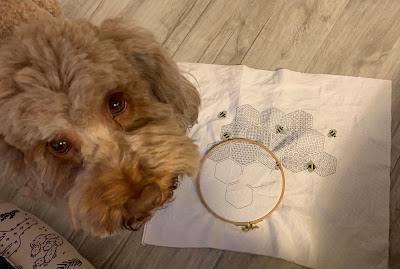 Finn wants to know if you like him or the picture better!!!???

I will link up with Kathy and the Slow Sunday Stitchers in the morning.

Posted by The Cozy Quilter at 7:29 PM

The Cozy Quilter
Ontario, Canada
As a child, I slept under quilts made by my grandmother. I started making quilts as a teenager and have made several quilts over the years.