You may have noticed that I was missing in action last weekend...no blog post!  Christine and I were away for the weekend at Camp Kintail.  The camp hosts two crafter's retreats every year and we try to attend both.  We both made great progress on the projects we brought with us and the meals and accommodations were fabulous!  The camp was decorated for Christmas, inside and out. The other retreaters were sewing, knitting, crocheting, doing paper crafts, making cards, making blankets, etc.  It was fun to see what everyone was up to and to visit with friends, old and new. I'm sure you are wondering what we made at the retreat... 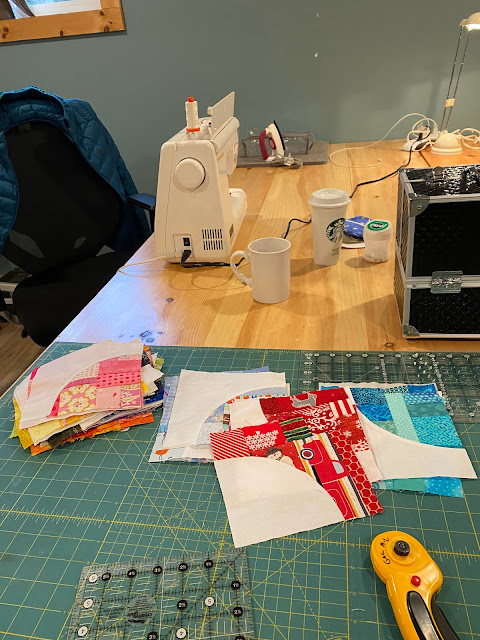 I always like to bring a simple, warm up project to kick off a retreat.  I put my scrappy drunkard's path blocks together and decided on a layout.  I took a picture and then put the blocks away to sew together at home.  I will likely use this as a wall hanging. 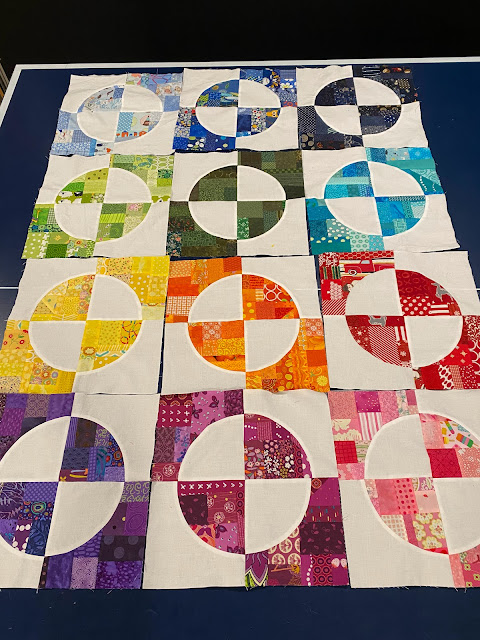 Next, I dug into my turquoise scraps, cutting lots of strips between 1" and 2.5" wide.  Such a pretty pile. 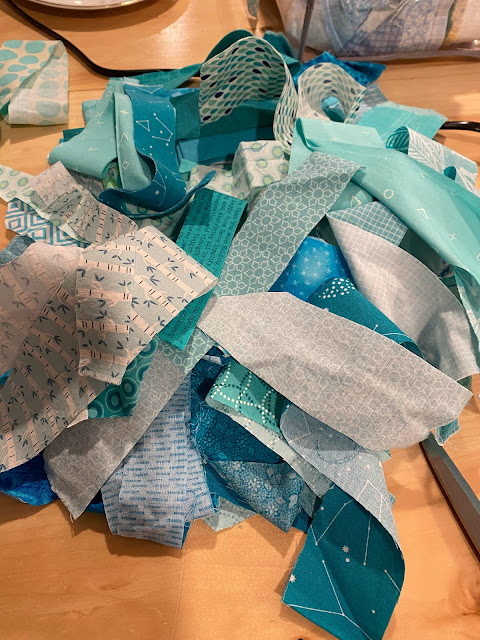 The idea for this quilt came from a free pattern on the APQS website called "Improvised Herringbone".  The pattern recommended foundation piecing the strips on a muslin base.  I didn't have any muslin so I used the interfacing cover from my recently purchased microwave instead.  I grabbed the cover from the box before it headed to the garbage and saved it from the landfill. (the box was recycled) I still have lots left, even after cutting everything I needed for my quilt. 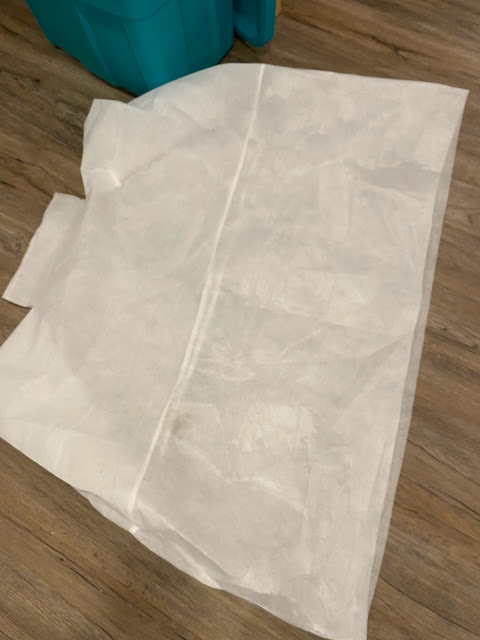 The blocks always look better after being trimmed!  Some of these scraps have been around for a while.  The heart fabric in the left rectangle is leftover from a quilt my daughter and I made for her bed when she was 12.  (She is 30 now!) 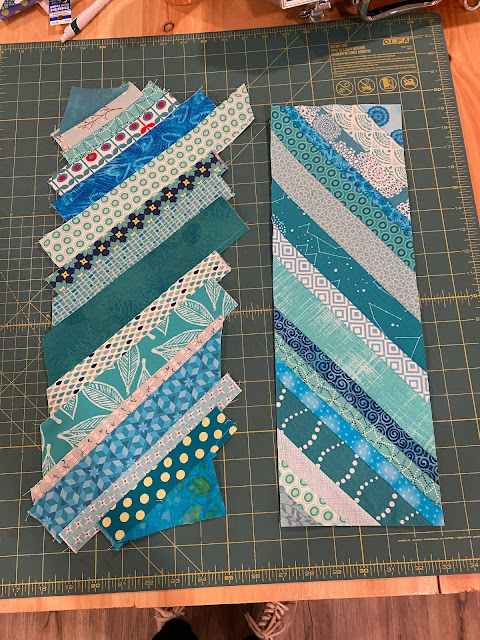 By Saturday evening, I had the quilt top made.  The background fabric is gray, even though is looks brownish in this photo due to the lighting in the room. 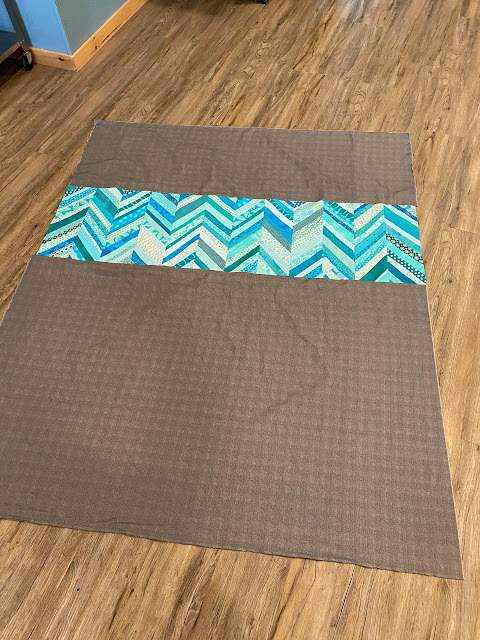 I used lots of turquoise scraps, but, alas, when I put the lid back on the turquoise bin, it still looked full!
Christine did some hand stitching and made a cute ornament for her dog, Charley, for the Christmas tree. 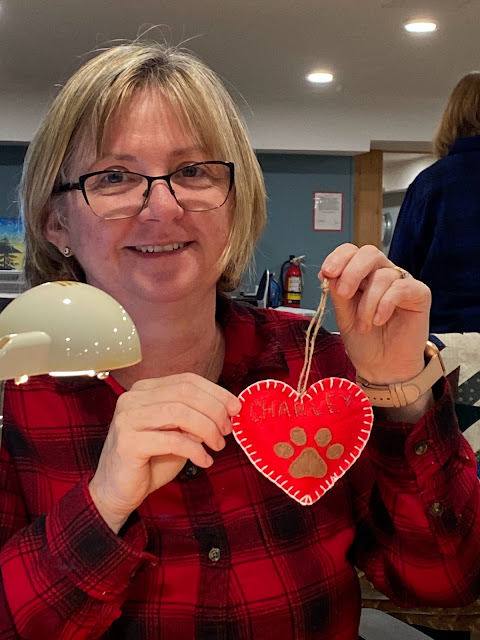 She also embroidered a name on a Christmas stocking, put the binding on a quilt, pin basted and marked a baby quilt for quilting and made some Christmas bags.  I don't have pictures of her other projects, sorry.
Saturday was a beautiful day so we took a walk down to the beach to see the lake after lunch. 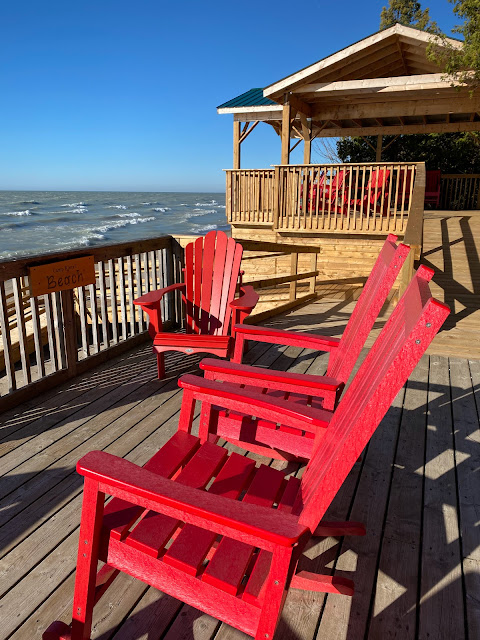 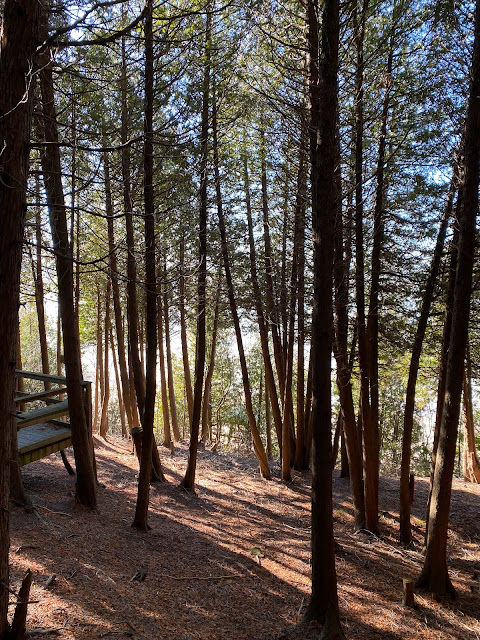 These friendly snowmen were outside the dining hall at the camp. 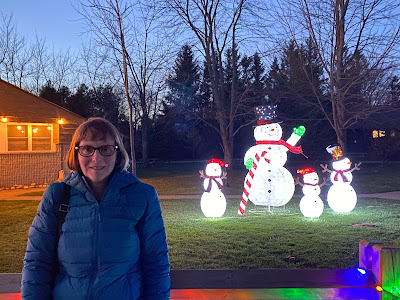 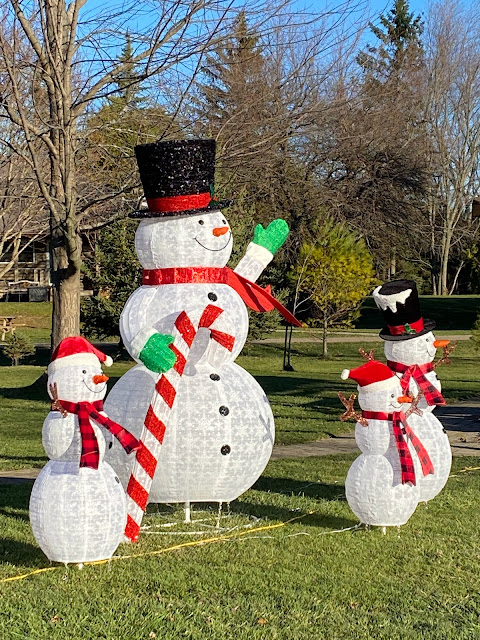 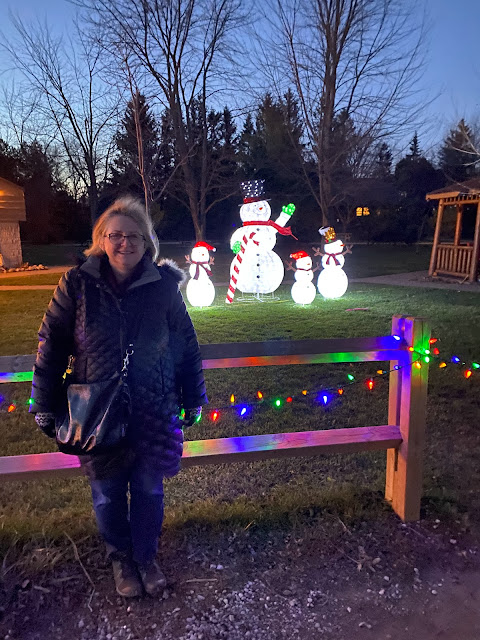 The table centrepieces were made from pinecones and wood slices from the trees at the camp. There was a a big wind storm earlier this year that brought down a lot of trees.  The downed trees were cut up for firewood and crafts/decorations. 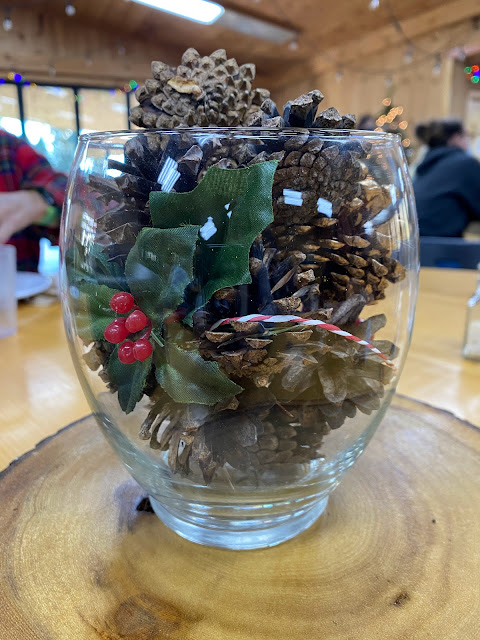 I finished piecing the back of the wedding quilt I started earlier this year.  Samantha was too many letters to make so Sam it is!  As you can see, the wedding was several months ago.  I promised to have their quilt to them by the end of the year and I should be able to meet this goal.  The bride and groom chose the colours and style (modern) of their quilt. 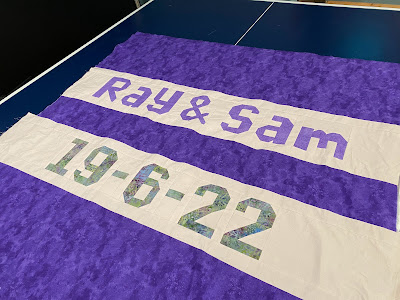 I spent some time this week working on the straight line quilting.  I'm about 2/3 done and hope to finish it soon. 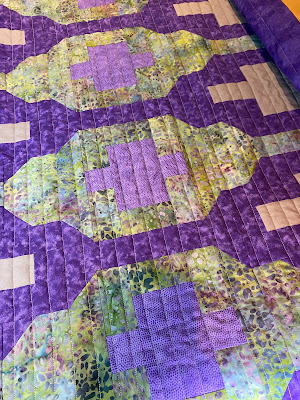 Of course, there was some secret sewing at the retreat as well...
I received a parcel in the mail yesterday.  It was from my daughter.  Last Christmas, she gave me piece of paper with the pattern for this embroidery picture to me as one of my gifts, with a promise to complete the embroidery before this Christmas. I was thrilled to open the package and find the finished embroidery.  It is now on the fireplace mantle in our living room. The pattern is by the Barmy Fox. 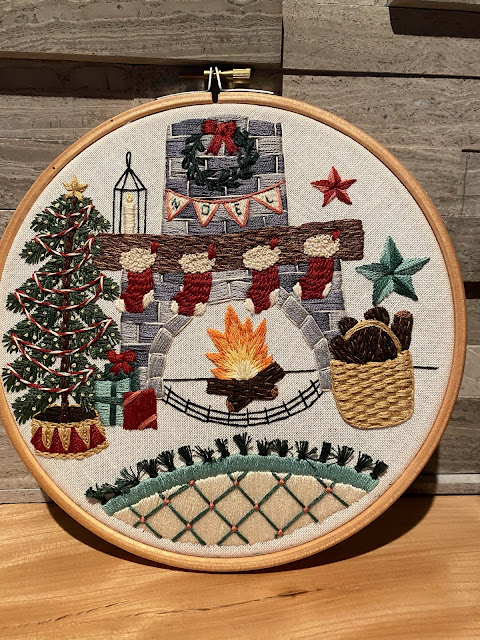 Finn didn't want my daughter to leave his side as he slept on the couch yesterday, so he held her down with his paw. 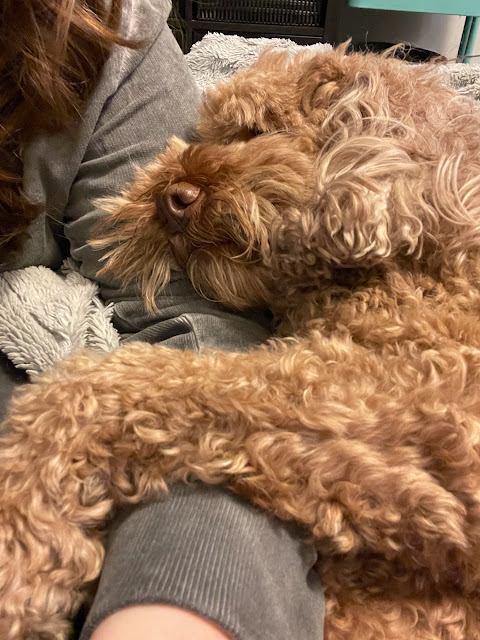 It's mitten season!  Finn likes to carry her mittens around but he doesn't damage them. 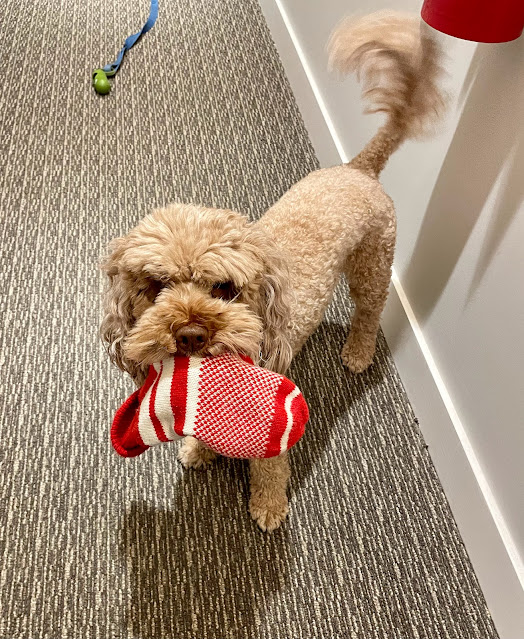 I will link up with the Rainbow Scrap Challenge group as well as the Slow Sunday Stitchers.  My secret sewing projects are hand sewn...  have a great week!
Posted by The Cozy Quilter at 7:54 AM

The Cozy Quilter
Ontario, Canada
As a child, I slept under quilts made by my grandmother. I started making quilts as a teenager and have made several quilts over the years.